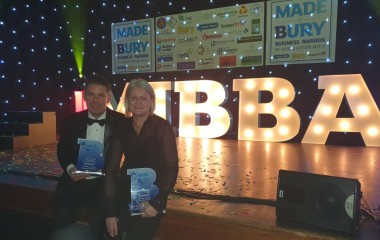 The Bury Black Pudding Company has scooped one of the most Prestigious awards in the town when they attended the Made in Bury Business Awards Last month.  After picking up a trio of individual awards, the highlight of the night came when the business was awarded an Outstanding Achievement Award for their dedication to promoting one of the town's most highly regarded and iconic products.
Councillor David Jones, introduced the special award describing a product which was iconic of the town of Bury and recognised the world over.  Unaware that the award was going to be made Bury Black Pudding Company Owners Debbie Pierce and Richard Morris were shocked and delighted to realise that he was speaking about their business.
Cllr. Holt paid tribute to the pair, who have dedicated their lives to the humble Bury Black Pudding and have grown their business from a market stall to a thriving business which employs over 90 local people and now produces over 65 tonnes of Bury Black Puddings every week.
As the pair took to the stage to accept the award, they received a standing ovation from the room; nobody could dispute that this was an accolade which was highly deserved.
In accepting the award Richard addressed the room, praising his team at the factory for the hard work and dedication that they show every day to maintain the business and deliver the highest standards and quality that people have come to expect.  He expressed the privilege he and Debbie have in being the custodians of the town's flagship product and paid tribute to his business partner and friend, Debbie Pierce, saying that it was her vision and attention to detail that was behind the remarkable rise of the business.
Speaking after the event, but still emotional Debbie said: "It is such an honour to have been given this award by the town which I call home.   It was not expected, and I cannot begin to explain just how much it means to me and the team to have been recognised in this very special way.  Thank you so much."
Share this job with a friend:
Email to a Friend
Print this page:
More Information
Contact Us