Bury Black Pudding to Feature in 'Made in Britain' TV Show 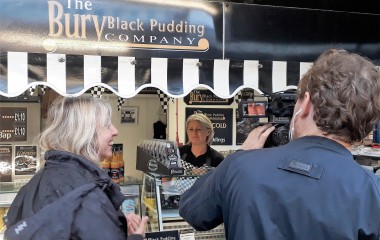 The Bury Black Pudding Company has been confirmed as one of the iconic British Businesses to feature in the latest series of the ITV4 show 'Made in Britain'.

The show, which features the stories and manufacturing processes behind some of the countries most recognised products, is narrated by Jimmy Nail and the world famous Bury Black Pudding Company are to appear in episode seven on Tuesday 27th November 2018.

Programme producers contacted the company earlier this year and asked if the iconic brand would consider being included in the programme.  Managing Director Debbie was naturally delighted to have the Bury business feature on the TV show, highlighting their locally made, but world famous, British product.

Filming of the programme was done over two days both at the factory site at Bridge Hall Lane in Bury and also on location at Bury Market, where the company still serve thousands of customers with their products from their market stall at No.5 Edward Block.

The programme is a light hearted documentary about the history, manufacturing process and interseting facts about how Bury Black Puddings are made and the journey from a market stall to a multi-million pound, international business.

Company Directors Debbie Pierce and Richard Morris tell the story of how the metioric rise happened and how this once humble Northern product became famous the world over.