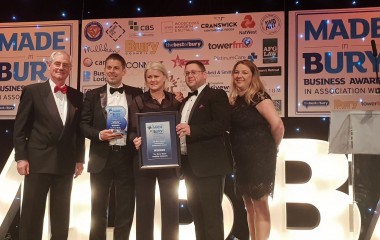 Bury Black Pudding Company Managing Director, Debbie Pierce has been awarded the title of Bury Business Woman of the Year 2019 at the Made in Bury Business Awards.  The award, which is in it's third year, recognises outstanding achievement by businesswomen in the town.
Debbie has been nominated for the award by staff at the Bury Black Pudding Company along with the support of friends and family who have seen her dedication throughout her career.
Sitting before the judges Debbie was asked about her business, and achievements but the most compelling evidence of her outstanding achievements came in the form of a short video which had been prepared by staff without her knowledge and featured employees, family, friends, traders from Bury Market and her business partner Richard Morris, all paying tribute to the dedication and hard work that Debbie has put into growing The Bury Black Pudding Company.
Debbie's mother, Val, recalled the early days when she sold her beloved sports car to finance her first van so that she could start making local deliveries.  Market traders spoke of her determination to build the business from a market stall to a multi-million pound business, but were keen to point out that she could still be found working on the market at busy times, laughing and joking with customers that she has known almost all her life.
Debbie's business partner Richard Morris, spoke of her passion and dedication that had been the driving force behind the now iconic Bury Black Pudding Company brand.  He said that it was her attention to details that made the brand the success that it was and had brought the humble Bury Black Pudding from market stall to world stage.
Receiving the award, an emotional Debbie thanked the people around her saying that this was not something that she had done alone and it was only with the support of family, friends and fantastic team of staff that she had been able to achieve all that she had.

There was not much time for celebration before Debbie found that the accolades were not finished quite yet.  Debbie was left speechless as the room once again turned to her and business partner Richard to acknowledge their commitment to the town's most iconic product with an Outstanding Achievement Award.  The pair took to the stage to a standing ovation with Debbie so overwhelmed that she could no longer speak, Richard accepted the award, praising their team at the factory for the hard work and dedication that they show every day to maintain the business and deliver the highest standards and quality that people have come to expect.  He expressed the privilege he and Debbie have in being the custodians of the town's flagship product and paid tribute to his business partner and friend saying that it was Debbie's vision and attention to detail that was behind the remarkable rise of the business.