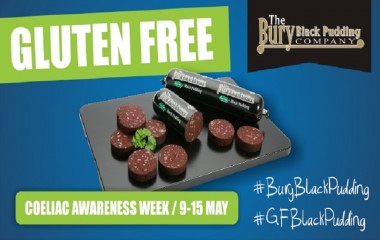 The Bury Black Pudding Company has long been recognised as a specialist producer of the finest quality Bury Black Puddings, but in recent years the company has also been producing a special Gluten Free Black Pudding which has been created for the growing number of people being diagnosed with Coeliac disease.
Coeliac disease (spelled celiac in some countries) is a lifelong autoimmune disease caused by the immune system reacting to the presence of  gluten - a protein found in wheat, barley and rye.
Coeliac disease is common and affects one in 100 people. However only 24% who have the condition have been diagnosed which means there are currently nearly half a million people who have coeliac disease but don't yet know.
Symptoms range from mild to severe, and can include bloating, diarrhoea, nausea, wind, constipation, tiredness, mouth ulcers, sudden or unexpected weight loss (but not in all cases), hair loss and anaemia.
Once diagnosed, the only treatment for coeliac disease is a gluten-free diet. This had meant that sufferers had not been able to enjoy regular Bury Black Pudding which contains barley and therefore gluten. Once gluten is removed from the diet sufferers generally start to feel better within a few weeks.  Diet change can be hard, especially when it means not being able to eat previously loved foods, so we have radically changed the ingredients of our Gluten Free Black Pudding to ensure that every batch is gluten free, but retains the famous Bury Black Pudding appearance, flavour and texture.  Now even the most severe sufferer can enjoy the fantastically traditional taste of Bury Black Pudding.
Gluten Free Bury Black Pudding is the result of months of development and testing and is now available across the country, from a wide range of independent stores, over 170 Morrison's supermarkets and from our own website for next day delivery at www.buryblackpuddings.co.uk.
Every batch of Gluten Free Bury Black Pudding is independently tested, and is not released for sale until it has been certified 100% free from gluten.  The product featured in the Coeliac UK directory when it launched and has been a hit with Coeliac UK members and patrons such as Caroline Quentin, who said: "I'm so excited, I love black pudding and have not trusted any since my diagnosis."
Gluten Free Bury Black Pudding as available in both a 220g roll and a 1.36kg stick, meaning that there is an option for both the home and commercial user.  With a great shelf life and the ability to be frozen too there really is no reason not to stock up and try out some of the delicious Gluten Free Black Pudding recipes on our website at: www.buryblackpuddings.co.uk/recipes/.
Share this job with a friend:
Email to a Friend
Print this page:
More Information
Contact Us