Do You Use Dried Blood or Fresh Blood in your Black Pudding? 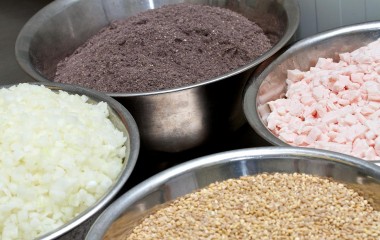 Further to the airing of Jamie and Jimmy's Friday Night Feast on Friday 13th January 2017 some customers have shown an interest in the type and source of the blood used in our black puddings.
We can confirm that we use dried pigs blood which is sourced from a single Spanish supplier that use animals from a single country of origin (Spain) and meet strict EU product guidelines for safety, quality and welfare.
We have not used fresh blood in our black puddings since the collection of blood was banned in the UK during the BSE crisis of 1996.  Whilst that ban has now been lifted, and fresh blood can be collected again, the scale of the UK blood industry is not able to meet the demands of major producers like ourselves.
Niche producers, such as the one featured on the programme, are able to make use of fresh blood, supplied locally, as they only make very small quantities of product; their production is limited by the availability of the fresh blood.  The manufacturer admits that the featured product is 'so rare' produced by just a handful of small suppliers.  Unfortunately this is reflected in the price which is three times that of our equivalent product.  Whist these may be interesting artisan products, like so many other very specialist foods, they are not generally viable in the wider market.
Although a reference was made to the volume of blood being collected in the UK the programme did not give the full story.  Unfortunately what blood is collected comes in varying quantities from hundreds of different farms and abattoirs spread throughout the UK.  Whilst the blood may be out there, there is no infrastructure to collect it and supply it on a large scale.  Also, with no blood drying done in the UK and the very short lifespan of fresh blood, it is really not a viable option to large producers.  This all means that producers like ourselves have no other option but to look to other sources.
We found that the move to dried blood did not alter the taste or quality of our black puddings in any way.  It is always difficult for us to comment on the taste of another black pudding.  There are numerous variations, including the one featured, which contained dried fruits not traditionally found in a British black pudding and therefore we would expect a significantly different taste to that of our Bury Black Pudding.   Our black pudding follows a traditional Lancashire recipe, which dates back over 100 years.  Ultimately taste is a very personal thing, but we believe that as the UK's leading retail black pudding we have something that is hard to beat.
We are a family business who have grown to meet demand for our award winning black pudding.  Our black puddings are still made to a traditional recipe using traditional methods, something which Jimmy Doherty congratulated us on when he visited our factory during filming when we appeared on his 'Food Unwrapped' programme back in March 2014.
Our black pudding is made with all natural ingredients and is recognised as the healthiest on the market due to its high iron content and low fat.
Above all else the safety and quality of our black pudding is our first priority, as demonstrated by our grade AA certification from BRC; the Global Foods Standards Agency.  Dried blood is a safer, more consistent product to work with and helps us to ensure that we can meet the high standards required by our customers without any compromise to the traditional taste of our Bury Black Puddings.
We hope that this reassures our customers of the lengths we go to, to make sure that we only ever offer the very best products without compromise.
Share this job with a friend:
Email to a Friend
Print this page:
More Information
Contact Us

© The Bury Black Pudding Company. 2022.
Connect With Us
Powered by PJ Web Design Manchester
XWe use cookies to make sure you get the best experience possible whenever you visit. That's why all our Cookies are turned on. To keep everything just the way it is simply close this notification.
Otherwise read about our cookies and how to manage them