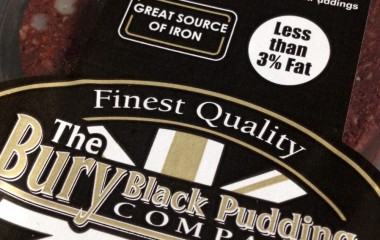 Black pudding brand leaders, The Bury Black Pudding Company in Bury, Lancashire, are striking back at nutritionists after sweeping claims that black pudding is an unhealthy, greasy food, undeserving of its recently announced superfood title.
Specialist producers, The Bury Black Pudding Company, have lashed out at the claims saying that the figures are not properly representative of black pudding.  They say the small selection of products included in the test sample did not represent the whole industry and that figures were generalised and very misleading.
Bury Black Pudding Company Director, Debbie Pierce said: "Whilst we agree that not every black pudding can claim to be a healthy option, we believe that some, like ours, are well deserving of the superfood title.  We pride ourselves on setting the standard when it comes to quality.  With less than 3% fat (less than 1% saturated), all natural ingredients and no preservatives in our slices, we offer all the nutritional positives without the negatives."
"Since the superfood story broke in the press last week we have been inundated by people wanting to get hold of our products because they recognise them as being healthy and nutritious.  We have always promoted our black puddings as a healthy option, but have seen other producers, with as much as 25% fat content, now latching onto the superfood status.  What people need to understand is that not all black pudding is as healthy as ours, there are vast differences in quality and people really need to look at what they are buying."
"Sweeping statements that condemn all black pudding are just not factual and claims that it could be damaging to people's health are just scaremongering.  Nutritionists, especially organisations such as the British Dietetics Association, should be helping to educate people about how to differentiate the good from the bad, rather than demonising an entire food group. It is should be about educating people on how to choose wisely rather than seeking headlines with generalised and sensationalist comments."
The northern delicacy was last week named by the Daily Mail and specialist food website, MuscleFood.com, as one of the superfoods to watch out for in 2016, thanks to its high iron content.  The argument was sparked after British Dietetic Association spokesperson and freelance dietician, Anna Daniels, spoke to the media saying that black pudding was "Quite high (speaking of the calorific content) and really high in fat."  She went on to claim that eating black pudding could have a detrimental effect and could even be damaging to people's health.  Claims all disputed by The Bury Black Pudding Company.
Share this job with a friend:
Email to a Friend
Print this page:
More Information
Contact Us